OVARIAN CYSTS are common and most women will have at least one during their life. In most cases they do not display any symptoms and are discovered only during routine physical exams and ultrasounds. In most cases, it is nothing to worry about but in rare cases it can lead to complications and hence it is best to get an ovarian cysts checked out by your gynecologist. 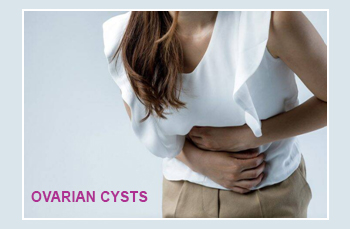 Ovaries are a woman’s reproductive organs that make female hormones and release an egg from a follicle (a small fluid-filled sac) each month. The follicle is usually about 2–3 cm when measured across (diameter) but sometimes can be larger.

What is an ovarian cyst?

An ovarian cyst is a larger fluid-filled sac (more than 3 cm in diameter) that develops on or in an ovary. A cyst can vary in size from a few centimeters to the size of a large melon. Ovarian cysts may be thin-walled and only contain fluid (known as a simple cyst) or they may be more complex, containing thick fluid, blood or solid areas.

There are many different types of ovarian cyst that occur before the menopause, examples of which include:

Other types of cyst on the ovary are less common.

How common are ovarian cysts?

Ovarian cysts are common. Most women will be unaware that they have a cyst as they often cause nosymptoms and disappear spontaneously with time. However, up to 1 in 10 women may need surgery for an ovarian cyst at some point in their lives.

Most cysts are diagnosed by chance, for example during a routine examination, or if you have an ultrasoundscan for another reason. Therefore you may have no symptoms at all. However, you may experience one or more of the following:

What happens next if your doctor thinks you might have an ovarian cyst?

You will normally be asked questions about your general health, your periods, whether you have any pain in your lower abdomen, your sex life and any contraception that you may be using. You may also be asked if there is a family history of ovarian or breast cancer. You will usually have an examination of your abdomen as well as an internal (vaginal) examination. You should be offered an ultrasound scan to look at your ovaries. This is likely to include an abdominal scan and one through your vagina. In the majority of cases, the ultrasound scan will be normal and a cyst on the ovary will not be a cause of your symptoms. If you do appear to have a cyst, the sonographer will check whether it is in your ovary. One in 10 suspected ovarian cysts actually involve other nearby structures, such as the fallopian tube or bowel. The scan will check the size and appearance of the cyst and look at your other ovary.

If your scan suggests that you have a complex cyst, you might be offered blood tests and CECT, which can help to determine what type of cyst it is. You do not need further tests if a simple cyst is diagnosed.

If the cyst does not trigger any of the above symptoms, it usually does not require treatment. Instead a pelvic ultrasound may be scheduled after a month to check on the size of the cyst. In most cases, these cysts resolve themselves within a month or two. In the case of larger cysts, a biopsy may be required to rule out the chances of the cysts being cancerous. Birth control pills may be prescribed to address the painassociated with this condition. These pills are also used to stop ovulation and reduce the risk of developing further cysts.

If you have been advised to have surgery to remove the cyst, what type of operation will it be?

You will usually be offered laparoscopic (keyhole) surgery, which is less painful afterwards than a laparotomy (open surgery) and usually means that you can leave hospital earlier and will recover more quickly.

A laparotomy (open operation) may be recommended if the cyst is very large or, rarely, if there is a suspicion of cancer. You should know the benefits and risks, and procedure whichis best for your situation.

Will my ovaries be removed if I have an operation?

Your ovaries are unlikely to be removed. The ovaries produce important hormones before the menopause and therefore in most cases only the cyst is removed. However, there are some circumstances where the ovary may need to be removed, for example if the cyst is very large or has completely replaced the entire ovary. The ovary may also need to be removed if the cyst has twisted so much that the ovary’s blood supply has been cut off, or, rarely, if there is a suspicion that the cyst may be cancerous.

What if I am pregnant and my ultrasound scan has shown that I have a cyst?

Simple ovarian cysts are often found on the ultrasound scan during pregnancy and most will disappear as pregnancy progresses. If the cyst is large or complex, you may be offered further scans during pregnancy and a scan after your baby is born. An operation to remove the cyst during pregnancy would only be recommended if you have pain thought to be due to the cyst, or, very rarely, if cancer is suspected.

Is there anything else I need to know?